I love Pinterest! It has been so inspiring to me, especially all of the DIY ideas posted on there.  Every once in a while, something I like is from an Etsy shop, like this wreath at alexandranoel for $45.  I have seen similar yarn wreaths other places on the web and on Pinterest, so thought they must not be too terribly difficult to make, and for cheaper than I found on Etsy.  I was right! 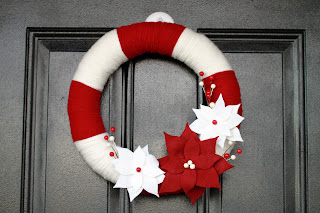 So in honor of the Christmas season, I decided to make a yarn wreath in red/white, with felt poinsettias in both red and white.  Here is a list of the materials I used:


So even with my gigantic felt purchase, it still cost less than $20.  I am annoyed that I bought so much felt (I am always afraid I won't have enough), because I could have done this project for about $13 or less.
Basically, I sectioned off my wreath and drew lines, in order to try to make my stripes similar in size.  I am not going to show pictures of how to wrap the wreath, because you literally just wrap it.  At first I did just a single layer of yarn, and it looked awesome (very smooth), but when I switched to the white yarn, it didn't cover as nicely.  Next time I might spring for nicer yarn that is a little thicker in weight.
Hint on wrapping: I made mini yarn balls, one for each section I wrapped... I felt this helped a lot, because the wrapping is time-consuming enough without getting your yarn in a knot.  I also used hot glue to hold the yarn in place each time I began a new color... just a dab to make sure it was secure.
After I was done wrapping the wreath and fixed all its annoying straw poky-ness, I got to work on the poinsettias   To make the poinsettias, I just free cut out a large leaf shape.  Then I used that as a template to cut out 7 more (8 in total).  I then free cut a smaller leaf shape, and cut 4 total of those.  Here is a picture of a leaf that made up the larger petals on my white poinsettias.  I trimmed the edges to make a more pointed look AFTER I cut out all of the leaves using the template. 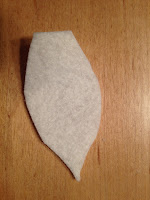 Next I made little slits in the bottom of the leaf, and used hot glue to overlap... I was trying to get more depth from the leaves. 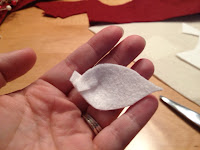 Next, I glued four of the large leaves onto a small rectangular piece of felt like so: 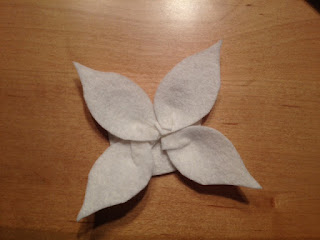 And then glued the remaining four large leaves, and four small leaves into this arrangement: 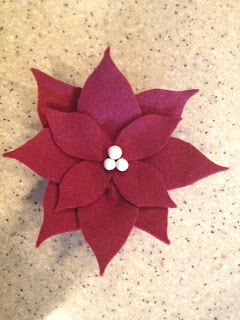 I varied the size of the large leaves, in order to make a larger red poinsettia and two smaller white poinsettias.  I cut a few berries off of the branch I used for the sprigs, and used them as the center of the poinsettia... I finished the wreath off by gluing just a few berry sprigs around the flowers.

And there you have it, a pretty Christmas wreath in a poorly taken photo! 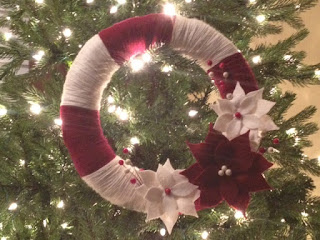